With offices in Hackensack, Morristown, Newark, and New Brunswick NJ 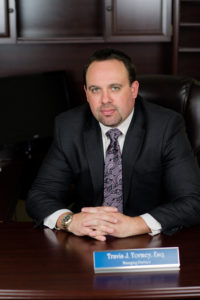 The Tormey Law Firm was established in 2012 by the managing partner, Travis J. Tormey. Mr. Tormey opened the practice after successful stints at two of the biggest criminal defense firms in New Jersey and after working for the United States Attorneys office in Newark. Mr. Tormey has since been cited in numerous publications including the Bergen Record, NJ.com, the Star Ledger, the Daily Record, the Asbury Park Press, and AOL News. He was also featured as a legal analyst on CBS radio. He has a perfect 10.0 rating on AVVO.com, an attorney rating service, and he has received the AVVO clients choice award for four straight years. He was also recently recognized as one of the top 10 criminal defense attorneys in New Jersey by the American Jurist Institute after previously receiving awards from the American Trial Lawyers Association and the National Association of Criminal Defense Lawyers. Mr. Tormey has been referred to as “The King of YouTube” by fellow NJ attorneys and his YouTube channel is a valuable legal resource when dealing with firearms issues in New Jersey.

Our firm is now a respected authority on New Jersey Gun Laws and was recently called upon as a legal resource for The Bergen Record to provide insight into the evolution of gun rights in New Jersey.

In addition to Mr. Tormey, our criminal trial team is composed of several former firearms prosecutors and judicial law clerks who know how the system works and how to best protect your rights and navigate through it. For instance, John Graves is a former Morris County Prosecutor who served in the weapons forfeiture unit during his time there. John has successfully handled numerous weapons forfeiture hearings as a defense attorney and is a vital member of our criminal trial team.

Nicholas Moschella is also an experienced criminal defense attorney who is “Of Counsel” with the Tormey Law Firm LLC. He maintains offices in Toms River and New Brunswick and handles all of the gun charges for the firm in Middlesex, Monmouth, Ocean, and Atlantic counties as well as throughout Southern NJ. Nick has handled a wide range of firearms cases for the firm including unlawful possession of a weapon, possession of a weapon for an unlawful purpose, possession of hollow point bullets. In addition, he has handled a number of firearms permit and ID appeals for citizens who are attempting to exercise their second amendment rights and having problems with the permits being issued.

Mr. Moschella and Mr. Tormey both worked for the largest criminal defense firm in the State of New Jersey before opening their own practices. Mr. Moschella has a strong foundation in firearms cases as he previously represented several police departments in Monmouth and Ocean county on firearms appeals filed by their residents. In addition, Nick is a former prosecutor who used to prosecute criminal cases in 22 towns throughout Monmouth and Ocean counties.

For more information or to schedule a consultation with an experienced New Jersey weapons attorney, contact our offices anytime for immediate assistance at (201)-614-2474.