“Being Charged with Attempting to Disarm a Law Enforcement Officer under New Jersey Statute Section 2C:12-11 means you are facing a minimum of 5 years and a maximum of 20 years in prison.” 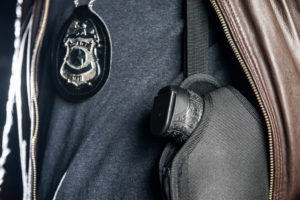 Disarming a police officer is a very serious violent offense in New Jersey. If found guilty, the culpable individual will certainly be sent to prison. Moreover, unlike many other offenses, they will have to serve nearly the entire prison term before becoming eligible for parole. With that said, this is definitely an offense you want to avoid being charged with if and whenever possible. Furthermore, if you are unfortunately facing such a charge for violating New Jersey statute 2C:12-11, you want to immediately contact an experienced defense attorney. At The Tormey Law Firm, our highly skilled New Jersey weapons and firearms lawyers represent individuals charged with disarming police, aggravated assault, and many other related crimes in Bergen County, Morris County, Essex County, Passaic County, Union County, and throughout the state. To discuss your specific case with an attorney who can provide personalized guidance and assistance, call us at (201) 614-2474 today. You can also reach out online for a free consultation.

Disarming a law enforcement officer is codified under New Jersey statute 2C:12-11. The statute itself consists of two sections: part (a) and part (b).

Section (a) reads that a person is guilty of a crime of the second degree if he or she knowingly takes or attempts to exercise unlawful control over a firearm or other weapon in the possession of a law enforcement or corrections officer when that officer is acting in the performance of his duties. The statute further provides that an officer does not have to be in uniform during the course of the offense. The statute applies if the officer is, in fact, in police clothing or exhibits evidence of his or her authority.

Section (b) provides that a person is guilty of a crime of the first degree if the individual knowingly takes or attempts to exercise unlawful control over a firearm or other weapon and the person fires or discharges the firearm, or the person uses or threatens to use the firearm or weapon, or the officer or another individual suffers a serious injury.

Police Disarming and Attempts to Disarm an Officer in NJ: Elements of the Offense

It is critical to understand what it means to disarm an officer.  The disarming statute contains some very specific and important language that we need to thoroughly examine. Whether the charged offense is a crime of the first degree or second degree, in order for the defendant to be found guilty, the State must prove three essential elements. First, the law enforcement officer was in possession of a weapon. Most officers carry a firearm and sometimes, they carry batons and tasers. However, the law does not limit the offense to just those particular items. A weapon can legally include any object that is capable of inflicting serious bodily injury. Furthermore, possession is not limited to actual possession, meaning, the officer was holding the weapon, or it was secured to their waist. Possession extends to any item where the officer has the ability to exercise control. For instance, if a firearm is on the ground but near the officer, that would very likely be considered possession. Another example could include a firearm inside the officer’s police vehicle. Even though the officer was not carrying the gun, it is very likely that a court would find that the officer had the ability to control the firearm and thus, exercised possession.

The next element is knowingly taking or exercising unlawful control over the weapon. The statute itself does not define the terms “takes” or “exercising unlawful control.” Additionally, the criminal code does not explain what those terms mean either. However, Judges have interpreted the language to mean the following. A person takes or exercises unlawful control when he or she does anything to take possession of an item without permission or authority. It’s important to acknowledge, the defendant does not have to gain possession of the weapon, the simple act of trying to remove the item is sufficient to satisfy the second element of the statute. Nonetheless, if a person takes or tries to exercise lawful control, he or she did not violate the statute. Generally, the only occasion where it would be lawful to control or try to control a police officer’s weapon would be through permission by the officer or in self-defense.

The third and final element is whether the law enforcement officer was acting in the performance of their duties and was in uniform or exhibited evidence of authority. Essentially, was the cop on duty when the event transpired or did it occur when the officer was off-duty is some personal capacity. For instance, if the officer was initiating a motor vehicle stop or executing an arrest, he or she is on duty. Conversely, if the officer was shopping at a store or socializing at a bar, he or she is very likely off-duty.

Penalties for Disarming a Police Officer in New Jersey

Disarming an officer is an extremely serious offense. A person facing such a charge may be found guilty of a crime of the second degree or, if a weapon was used or someone was seriously injured, a crime of the first degree. Second degree charges subject the defendant to five to ten years in prison and a fine up to $150,000. First degree offenses expose the individual to ten to twenty years in prison and a $200,000 fine.

Additionally, a person charged with either degree will almost certainly be sentenced to prison. Even if the person has never been convicted of a crime before and has never even been arrested. Both first and second degree charges in New Jersey carry a presumption of imprisonment. This means essentially that it is presumed that the person is going to prison unless he or she can demonstrate to the Court some idiosyncratic reason that makes their set of circumstances unique. To that end, contrary to what many believe, your case or your background is not special or different from the other defendants the Judge has sentenced throughout his or her career. Again, if convicted, is it almost certain you are going to prison.

On top of the incarceration, the person will have to serve at least 85% of the imposed term before he or she is eligible for parole. Disarming a police officer is referred to as NERA offense, which stands for No Early Release Act. The NERA Act is part of New Jersey’s sentencing code and can be found under N.J.S.A. 2C:43-7.2. According to the Act, any person convicted of a serious first or second degree crime, such as disarming a police officer, must serve 85% of the imposed prison term before they can become eligible for parole. Keep in the mind, the NERA statute only applies to the first degree crime charged under section (b). Therefore, if you are convicted of the second degree charge under section (a), you do not have to serve 85% of your sentence before you qualify for parole. But, if you are found guilty of first degree disarming an officer, you will be facing up to 20 years in jail and must serve a very large portion of the sentence before you can be released.

As you can see, if you have been arrested in New Jersey and are facing a charge for disarming a law enforcement officer, it’s important you contact an experienced attorney who can aid in your defense. Knowing the law inside and out, having experience defending clients charged with this offense, and being able to comb through the evidence, finding ways to deliver the best results, is what we do at The Tormey Law Firm. For more information and a free consultation, you can contact us at (201) 614-2474. A dedicated lawyer on our team is available to provide you with immediate assistance.