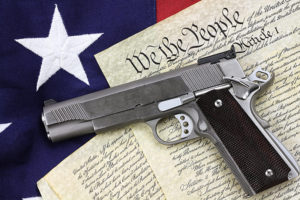 New Jersey news outlets have reported that several new gun control bills are expected to pass and become laws soon. The NJ legislature is seeking to pass stricter gun bills limiting the amount of rounds in a magazine clip, prohibiting the sale of body-armor-penetrating ammunition, requiring the seizure of firearms when a mental health professional determines that someone poses a threat, requiring background checks for private gun sales, and obligating NJ residents to show a “justifiable need” to get a carry permit.

The recent proposals are in response to the tragic school shooting in Parkland, Florida. However, many people are not in favor of the new laws. They voiced their objections at a protest in Trenton on March 26, 2018. Around 100 individuals protested the passing of the new bills and held demonstrations in order to show their dissent. Most of those opposing the NJ legislative proposals believe that guns are not the problem and that the true issue with gun violence centers on the perpetrator. Despite the opposition, New Jersey Governor Phil Murphy indicated that he will sign the bills into law if they are passed.

In New Jersey, a person may lawfully own a gun and keep the firearm in their home or place of business without any permits or licenses. On top of that, the owner may also travel with his or her firearm directly from their home to their place of business, to a firing or target range, to go hunting, or to get their weapon repaired. See N.J.S.A. 2C:39-5 and N.J.S.A. 2C:39-6. However, if you wish to travel to some other location not permitted by New Jersey gun laws, you must obtain a carrier’s permit. To obtain such a permit, an interested applicant must submit an application to their local police department and must be able to demonstrate the following: (1) that they have good character, (2) that they are not subject to any disqualifications which would prevent them from obtaining a permit to purchase a weapon, (3) that they are thoroughly familiar with the safe handling and use of handguns; and (4) that there is justifiable need to carry a handgun. See N.J.A.C. 13:54-2.3.

A person may be disqualified from owning a gun if they have a criminal record, are subject to a restraining order, are suffering from a form of substance abuse, are suffering from a mental or physical handicap that would make it unsafe for the applicant to handle a firearm, or pose a danger to the public.

“Justifiable Need” for a Firearm in NJ

Justifiable Need is generally why most applications are denied. Justifiable Need has been defined as an urgent necessity for self-protection, as evidenced by specific threats or previous attacks which demonstrate a special danger to the applicant’s life that cannot be avoided by means other than by issuance of a permit to carry a handgun. See Siccardi v. State, 59 N.J. 545, 553, 284 A.2d 533 (1971).

If you wish to purchase a firearm, you must also obtain a permit. Similar to how one would receive a carry’s permit, an interested applicant must submit an application and demonstrate that they are a person of good moral character and also show that they are not subject to any disqualifications like the ones listed above. Furthermore, after receiving a permit, the permit holder can only purchase firearms from a licensed dealer. New Jersey law forbids the sale of guns from unlicensed dealers. See N.J.S.A. 2C:58-3.

If you do not obtain the proper permits and licenses, you could be charged with second or third degree Unlawful Possession of a Firearm, in violation of N.J.S.A 2C:39-5. You would face 5-10 years in prison for a second degree offense and 3-5 years in jail for a third degree charge. In addition, pursuant to the Graves Act, you will also be required to serve a minimum time in jail, ranging from one-third to one-half of the sentence imposed or three years, whichever is greater.