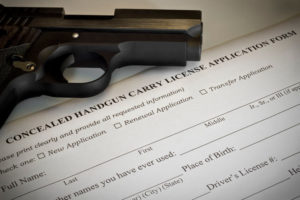 A piece of legislation passed in the U.S. House of Representatives may significantly alter current law on state-to-state reciprocity of handgun carry permits. If the bill is passed, a person with a concealed carry permit from another state would be able to bring their gun to New Jersey without facing criminal charges for unlawful possession of a weapon.

The aforementioned legislation, entitled the Concealed Carry Reciprocity Act, was already passed in the House of Representatives. Now, it must pass the U.S. Senate to have a chance at becoming law. President Trump supports the bill and it currently has approximately 40 senators co-sponsoring it. So, what will the Concealed Carry Reciprocity Act do exactly? How does it change current federal law on guns? And what will the passage of this bill mean for gun owners traveling in New Jersey? Let’s take a look.

The Concealed Carry Reciprocity Act (H.R.38), amends the U.S. federal criminal code to allow a person with a valid concealed handgun carry permit from one state to carry a handgun into, or possess a gun, in another state that allows permits to carry concealed firearms. In order to be in compliance with the new law, the person must:

In addition, the bill allows a person who lawfully carries or possesses a concealed handgun in another state to avoid prosecution under the federal law against possessing a firearm in a school zone. It also allows an individual with a valid concealed carry permit to possess the concealed gun on federal property that is open to the public.

Under current federal law, a person is required to abide by the gun laws of the state they are in while they are in that state. For instance, a qualified person may be able to purchase and carry a loaded firearm in public in some conservative states like Arizona. However, the same person cannot obtain a permit to carry a handgun in New Jersey unless he or she demonstrates a “justifiable need.” As a result, people traveling from other states cannot carry their firearms into New Jersey without risking serious prosecution.

In order to carry or possess a weapon in New Jersey, you must obtain a permit to do so from the State of New Jersey. New Jersey does not recognized handgun carry permits from other states, period. So, if you live in Virginia and you come to New Jersey with a lawfully-purchased and possessed firearm, you can be charged with unlawful possession of a weapon in violation of N.J.S.A. 2C:39-5. According to this statute, unlawful possession of a firearm is a second degree crime punishable by up to 10 years in NJ State Prison. In addition, firearms offenses in New Jersey are subject to the stringent sentencing requirements of the Graves Act. If you are convicted of a Graves Act gun crime, you are required to serve mandatory prison time and a period during which you are ineligible for parole.

Believe it or not, gun charges for unlawful possession of a weapon are regularly issued in New Jersey to otherwise law-abiding citizens from other states who simply did not know they were violating NJ law. One such case that illustrates this issue occurred in 2013, when a single mother from Pennsylvania was charged with unlawful possession of a handgun in Atlantic City. The woman was the victim of a mugging prior to obtaining a concealed carry permit in Pennsylvania.

When she came to New Jersey from Philadelphia, she didn’t realize she couldn’t bring her gun. Although she had no prior criminal record, she was charged with a second degree crime and was detained in jail for 2 months. Ultimately, Governor Chris Christie pardoned her so she was able to return to her children and her home state.

After the case discussed above garnered national attention, the New Jersey Attorney General issued a directive allowing people charged under similar circumstances to be considered eligible for the Pretrial Intervention Program (PTI). PTI is a diversionary program which is normally prohibited in cases involving second degree crimes. It allows a person enrolled to have their charges dismissed by successfully completing a period of probation. In order for a person to be considered a candidate for Pretrial Intervention when charged with unlawful possession of a weapon in New Jersey:

It is important to note that PTI is not given readily in all cases of unlawful possession of a weapon, even when the defendant meets the criteria above. If you have been charged with illegal handgun possession in New Jersey, it is highly advisable to enlist an experienced attorney who can help you gain admission into the Pretrial Intervention Program if you are considered eligible.

Charged in New Jersey for a Gun with a Permit?

Ultimately, the fate of the The Concealed Carry Reciprocity Act has yet to be determined. If the bill does become law, a person permitted to carry a concealed firearm in their home state will be allowed to carry it in any other state in America. Until such time, anyone who brings a permitted gun to New Jersey risks harsh criminal penalties. At The Tormey Law Firm, our highly experienced New Jersey gun lawyers defend clients across the state against charges for unlawful possession of a weapon and other weapons crimes. If you or a loved one is facing firearm charges in New Jersey, contact us anytime at (201)-614-2474 for a free consultation. We are happy to answer all of your questions and discuss your legal options.

For additional information pertaining to this matter, access the following article: The showdown over the Concealed Carry Reciprocity Act