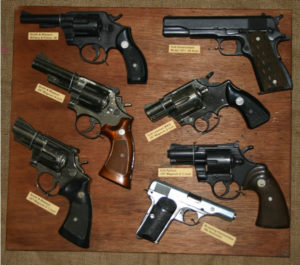 The owner of Nugent’s Tavern, a landmark bar in Elizabeth, New Jersey that opened in 1933 following Prohibition, was recently arrested after police officers responded to a domestic violence complaint. Additionally, dozens of guns, including an assault weapon banned in NJ, were seized. According to authorities, the owner of the bar, Mr. Santos, was involved in a verbal dispute with a woman referred to in police reports as R.F. The two were arguing because R.F. had a broken foot and requested to be taken to the hospital; however, Mr. Santos allegedly refused. The argument escalated and R.F. reportedly threw two glasses at Mr. Santos. In response, Mr. Santos allegedly grabbed R.F. and bit her on the neck. A neighbor, referred to as C.E. in Elizabeth police reports, overheard the altercation and attempted to enter Mr. Santos’ apartment to intervene. However, Mr. Santos allegedly threatened to shoot the neighbor if he entered the residence. C.E. stated that he heard Mr. Santos cock a firearm. R.F. eventually contacted the Elizabeth Police Department. Upon the arrival of law enforcement, Mr. Santos was arrested and subsequently charged with simple assault, terroristic threats, resisting arrest, and unlawful possession of a weapon. Moreover, police seized a dozen of the suspect’s firearms.

Seizure of firearms is very common when New Jersey police respond to a domestic violence report. Under the Prevention of Domestic Violence Act, when a person claims to be a victim of domestic violence, the responding officers are obligated to arrest the alleged perpetrator if there is probable cause to believe that an incident of domestic violence has occurred. The police are instructed to examine whether the alleged victim has any signs of injury, whether there is a warrant in effect, whether there is a current restraining order in effect, and/or whether a weapon is present and was possibly utilized.

In addition, authorities may also seize any firearms or weapons alongside any firearms permits and licenses. If seized, the items must be returned at some point – unless the local prosecutor’s office files a motion with the Family Court and properly notifies the owner within 45 days after the firearms were seized. In order to permanently seize the firearms and any permits and licenses, the prosecutor’s office must demonstrate that the owner is unfit to possess a weapon. If the owner objects to the seizure, a hearing before the Family Court will be held within 45 days after receiving notice of the prosecutor’s intent to keep to the weapons.

The Family Court will return any seized firearms and permits if it is convinced that the owner is not disqualified from owning a weapon. The Family Judge will examine whether the owner has a criminal record, examine the owner’s mental and physical health in order to determine whether he or she is capable of safely handling a firearm, consider whether the person is a habitual drinker or is suffering from any form of substance abuse, determine whether the individual is the subject of a restraining order, and find out whether the owner presents a risk to the public. In addition, the Family Court must also find that the underlying restraining order was dismissed at the request of the complainant, as well as find there was insufficient probable cause that a crime or act of domestic violence occurred. Alternatively, if the restraining order was not dismissed at the request of the complainant, the Family Court must verify that the owner was found not guilty of domestic violence or that the domestic violence situation no longer exists.

If the Court rules unfavorably, the firearms may be sold – with the owner possibly receiving the proceeds. Also, the gun owner charged with domestic violence can arrange for the items to be transferred to a person permitted to own firearms.