New Jersey Laws on How to Safely Store Guns in Homes 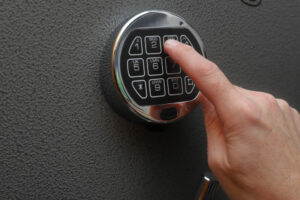 New Jersey’s gun laws cover a wide range of ownership and handling practices, including how to obtain and use firearms, but not how to store them. Gun-owning New Jerseyans need permits and identification cards to purchase, own, or carry a firearm but do not currently have to comply with a thorough, mandatory policy on how to store them safely on their property. Residents have more liberty to possess a gun at their residences or businesses, but New Jersey does not directly legislate gun storage in these locations. Nevertheless, laws do exist regarding transportation and maintenance of weapons where children may access them.

Exploring how New Jerseyans keep their firearms, a recent study by Rutgers University explored New Jersey gun storage practices at home, analyzing the number of people who have firearms in their houses, how they store guns at home, and the prevalence of gun owners taking their weapons to other locations.

Rutgers New Jersey Gun Violence Research Center (GVRC) provides research on the nature of gun access, ownership and crime, its causes, prevention, and treatment on the individual, community, and societal levels. The Rutgers report conducted in July of this year aimed to study New Jersey gun ownership, storage, and access habits. The GVRC and Eagleton Center for Public Interest Polling worked with Rutgers to conduct the telephone interview study of 1,018 adults. Of the interviewed subjects, the study revealed that there are 1.5 million residents with guns on their property. The study also exposed how New Jerseyans maintain their firearms.

According to the gun report, a significant percentage of those 1.5 million residents with firearms store guns unlocked and loaded in their homes. The researchers suggest that these practices in houses and in cars could result in gun accidents. The study aimed to provide policymakers with statistical information regarding gun storage and ownership. Specifically, the study is a limited canvas of how many people store guns loaded, unlocked, and their attitudes about gun possession.

Among the notable findings in the study, roughly 15% of the participants store guns unlocked at home, 20% keep them loaded, over 10% keep them in vehicles, and 8% (mostly 45-54 years old) carry guns when they leave their residences. But these are the responses of those who agreed to answer the researchers’ questions. Others refused to answer some of the questions. The report confirms an error rate of +/- 3.8 percentage points.

What Could Change with Gun Storage Requirements in NJ Residences

With this study’s attempt to establish data for New Jersey gun policy and legislation, and others seeking to change the laws on safe storage of firearms in houses, changes to the current policy may happen in the future. As of now, a firearms storage bill stalled in the New Jersey legislature and has yet to become law.

The implications of the study findings, the New Jersey Monitor claims, are the need for safety initiatives that may reduce risks of child shooter fatal accidents and domestic violence fatalities. Additionally, supporters of safe storage laws argue that unlocked loaded guns in homes and cars raise the chances for stolen guns and, thus, illegal use of firearms, as well as road rage deaths. Still more proponents of legislation on legally storing firearms state that those with guns readily accessible for use may be prone to reactive shooting, as opposed to the pause that comes with unloaded guns stored in locked safety enclosures. Whether or not this leads to legal changes and gun storage policies in New Jersey remains to be seen.

Can You Keep Your Gun in Your House in New Jersey?

Yes, and New Jersey law currently has no comprehensive legal standards for safe gun storage. As to residents carrying guns, New Jersey allows those with permits to carry firearms, though carry permits are limited to handguns and issued on a case-by-case basis. But New Jersey legislators are busy working on legislation to restrict concealed carry permits in the wake of the Supreme Court decision in New York State Rifle and Pistol Association v. Bruen. That case struck down New York’s state law requiring licenses for carrying concealed weapons in public based on special need as unconstitutional.

Other New Jersey gun laws require proper storage in vehicles. A resident may transport a firearm in a car if they have a permit and keep the gun unloaded, in a fastened case, inaccessible to the driver up front or passenger. Thus, one transporting a firearm from a licensed dealer, or to and from shooting ranges or competitions, among other authorized locations, must keep the gun and ammunition separated and locked away from the front seat. And finally, if a gun owner knows a child can access a gun, they must secure the gun so that the child may not get to the weapon under the Child Access Protection Law. Firearm dealers must give written warnings to gun purchasers that it is a crime to leave loaded guns within reach of a minor.

Those arrested for gun law violations in New Jersey for unlawful possession, transportation, ownership, or sales of firearms face potentially devastating consequences. Gun violation penalties are harsh and unforgiving. The state and federal laws aim to deter illegal gun purchases and possession. Getting caught with unpermitted firearms exposes you to a three-to-five-year sentence or a five to ten-year sentence, depending on the type of gun. Unlawful possession of a handgun is a second-degree crime that can land you in prison for up to ten years without the possibility of parole for at least 42 months under mandatory minimum sentencing laws. In addition, you could pay a fine of up to $150,000.00.

And penalties are higher for crimes committed with guns. The Graves Act imposes a mandatory minimum sentence for illegal gun possession and criminal acts committed while in possession of firearms. That means even first-time offenders get long, harsh penalties, whereas they might receive a more lenient sentence or probation in other circumstances. In certain cases, a first-time offender may get a waiver of the Graves Act requirements. However, it takes complex legal knowledge to obtain one, as the prosecutor files a motion for the waiver because it is in the interests of justice that a defendant receives a waiver of a mandatory minimum sentence in a gun case.

All in all, you will need a sharp gun lawyer to help you convince the state to allow leniency if you have been arrested for violating any of NJ’s firearms laws. An attorney can secure your rights to a speedy, fair trial and lawful handling by law enforcement. In addition, a savvy gun lawyer knows that the state must prove all of the elements of your alleged crime for a conviction. Additionally, the police must not infringe on your constitutional rights by an illegal search and seizure of your home or vehicle. When that does happen, a defense lawyer can file a suppression motion to eliminate critical evidence from the prosecutor’s case.

An attorney can also defend you at trial or negotiate a plea on your behalf, becoming your greatest asset when seeking to present the most compelling defense against gun law violations. Call our gun attorneys in NJ for additional assistance with a gun charge or firearm-related legal issue. You can reach us online anytime or by phone at (201) 614-2474 for a free consultation.