Since stolen firearms are often illegally trafficked and used in the commission of crimes, New Jersey requires legal gun owners to report guns that have been stolen and countless people face criminal charges involving stolen weapons in NJ. 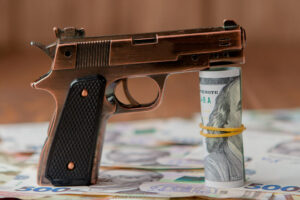 It is estimated that nearly 250,000 to 400,000 guns are stolen every year in the United States. Often, firearms are stolen from the homes, cars, or businesses of lawful gun owners. Both Federal and local law enforcement agencies recognize that stolen firearms are more frequently  used in the commission of serious crimes like murder, robbery, theft, extortion, carjacking, and burglary, as well as drug crimes and others. To assist in the tracking and tracing of firearms in New Jersey, the legislature requires every lawful gun owner to report a stolen firearm to authorities.

In fact, in New Jersey, licensed gun owners have a duty to report any firearms that have been stolen. Failure to report the stolen firearm can result in civil penalties and possible criminal charges.  Additionally, people caught with the stolen weapon face even harsher penalties and punishment. There are numerous that can befall a gun owner or someone caught with a stolen weapon.  Therefore, it is imperative that you seek the advice of an experienced weapons attorney when your firearm is stolen or if you are caught with a stolen weapon. The talented team of lawyers at The Tormey Law Firm are able to provide in-depth counsel on what  to do if your firearm is stolen and to defend you against any claims or crimes involving firearms. We defend clients charged with all types of criminal offenses involving stolen guns and other weapons across the state of New Jersey. If you need assistance with a case or have questions about the laws applicable to stolen firearms, call (201) 614-2474 now to speak to an attorney in a free consultation.

The Federal Bureau of Alcohol, Tobacco and Firearms (ATF) assists the states in tracking or tracing firearms. Every firearm has a serial number and that number should be entered into a database which enables tracking. The tracking allows for tracing in the event a local state agency requests the information.  Many local police departments or prosecutors’ offices will request tracing related to criminal acts or cases in which firearms are discovered in connection with a crime.  While not all firearms are traced, in 2020, the ATF reports that nearly 5000 firearms were traced to New Jersey. For one reason or another, whether from Tennessee, Texas, South Carolina or any other state, nearly 5000 weapons were found in New Jersey.

Many of these firearms were likely stolen and the owners of the weapons had a duty to report the theft to local authorities.  The ATF has instructions for reporting thefts of firearms but, unlike New Jersey, they have no clear cut requirement to report the theft.

Are You Required to Report when a Firearm is Stolen in NJ?

New Jersey is one of 11 states that requires lawful gun owners to report the theft. In fact, New Jersey Law NJSA 2C:58-19 makes it clear that you must report a gun theft within 36 hours.  If you discover that your firearm has been stolen, you must contact the chief law enforcement officer in the town in which the gun was stolen or if none exists, the Superintendent of the New Jersey State Police.  That law enforcement agency also has a duty to report the make, model, and serial number of any firearm believed to be used in a crime to the National Crime Information Center 2000 System and to the New Jersey Trace System.  But for law enforcement, there are likely no consequences for failing to report the firearm.

For individual citizens who fail to report, however, there are potential civil penalties of $500 and $1000. Additionally, you as a legal gun owner, have a responsibility to secure your weapon properly whether in your home, your car, or business. Sometimes people are fearful that authorities may question them about the storage of their weapon and do not report the theft due to this fear.  But failing to report the weapon as stolen can prove more troublesome than if you had reported it as many times, the stolen weapon is later discovered as part of an investigation into a crime.

The stolen firearm could be used in the commission of a crime and if it is not reported, it could be traced back to you as the last lawful owner.  People intending to commit crimes as a general rule, do not obtain firearms through proper legal channels.  Instead, they may come into possession through home or car burglaries or purchase the firearms from the black market, knowing they are stolen.  The weapons may then be used in the commission of various other crimes such as:

Additionally, if caught with the weapon, the individuals will undoubtedly be charged with any number of offenses including:

New Jersey has some of the stiffest sentencing laws for weapons related offenses. Almost all gun offenses will require state prison if convicted, provided that your lawyer can not achieve an alternative resolution through probation, Pre-Trial Intervention, or getting the charges dismissed altogether. However, lawful gun owners whose firearms were stolen are generally in a much different legal position.

Questions or Concerns about a Stolen Gun Case in NJ?

Regardless of whether you are a lawful owner or a person caught with a stolen gun in New Jersey, the attorneys at The Tormey Law Firm can help. For lawful owners, our lawyers can assist in reporting the firearm as stolen. If you enlist our firm’s help, we will make sure you know how to communicate with the police, provide assistance in the communication if necessary, and document that the theft was, in fact, reported. By assisting in the communication, we can avoid any miscommunication and provide security in knowing that the weapon was, in fact, reported as stolen. Likewise, we can handle your case if you ran into an issue for failure to report a stolen firearm to law enforcement within the time limitations required. As for people charged with stolen gun related crimes, we will communicate with the state on your behalf, determine the right approach in your case, and begin to mount a zealous defense to the serious charges that can land you in state prison for years to come. Be proactive in your case, contact us at (201) 614-2474 today for a free initial consultation.