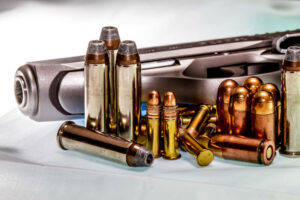 If you want to voluntarily get rid of a weapon in New Jersey, there is a specific law that regulates this process under N.J.S.A. 2C:39-12. You must readily comply with the proper procedures contained in the statute in order to avoid serious criminal charges for a firearm, weapon, device, substance, or instrument discussed in the law on voluntary surrender. People turn weapons in for a plethora of reasons. Perhaps a family member passed on a few weeks ago and you found several shotguns in the house that you had no use for. Or in some cases, a married couple will be starting a family, so they have decided to surrender all of the firearms in the house to avoid any mishaps with their future children. For some, a simple walk in the park or stop on a public bench leads to the discovery of a handgun that they choose to turn in. Sometimes, people who have reached a certain point in their lives will turn in their guns to avoid a criminal possession charge, especially when they already have unrelated charges pending. And still others find themselves worried when they find out that a weapon in their possession is actually illegal in New Jersey, such as high-capacity magazines or hollow-nose bullets. All of these situations any many more may lead to the voluntary surrender of weapons in New Jersey. Despite the variability among scenarios and reasons for turning something in, one thing is certain: you need to know the right steps to follow in order to prevent legal liability when surrendering a weapon in NJ.

According to N.J.S.A. 2C:39-12, to voluntarily surrender firearms, weapons, explosives, silencers, or destructive devices in New Jersey, a person must notify the chief of police in writing as to the day and time they will do so. The person who wants to surrender their weapons must do so in writing first, contacting the superintendent or chief of police with the name of the person, the date, and the time they would like to affect the surrender. This must be done in the municipality where the interested party resides. If the authorities receive the notice before any charges have been filed, an arrest is made, or an investigation has begun by any law enforcement agency regarding unlawful possession of a weapon, device, instrument, or substance in question, then the person will be granted immunity for illegal possession of the surrendered gun or other instrument, weapon, or device. The only immunity granted is for unlawful possession of weapons, devices, explosives, and others related to the weaponry. Thus, the individual is not given immunity from prosecution for any other crime that may be related, simply by surrendering the item itself.

What Kinds of Guns and Weapons Fall under this NJ Statute?

A destructive device is anything that could explode, such as grenades, bombs, mines, rockets, rocket launcher, Molotov cocktails, and any other devices that can be ignited to create an explosion. A firearm refers to an automatic or semi-automatic gun (rifle, shotgun, handgun, machine gun, etc.) of any make that can eject a projectile in the form of a ball, missile, or bullet. Air guns, spring guns, or pistols where the projectile is forced by a spring, elastic band, compressed air, or carbon dioxide are included. A firearm silencer is included as a weapon, and this means any instrument, attachment, weapon, or appliance used to muffle the sound of the firing of any gun. A machine gun means any firearm that allows multiple projectiles to be fired simultaneously without requiring the trigger to be pulled for every shot and having a reservoir, belt, or other means of storing and carrying ammunition. Rifles and shotguns are fired from the shoulder and are single-shot to trigger action weapons.

Do You Get Immunity if You Voluntarily Surrender a Weapon in New Jersey?

Partially, yes. You will be granted immunity for the unlawful possession of weapons if no charges have been filed or investigations have begun into your possession case. You will not receive immunity for any other charges, even if you turn in your weapons. In the eyes of the law, it would hardly be fair to have someone turn in his guns with a clean record and not get into trouble because they weren’t bought legally, then for someone else to get the armed robbery, assault with a deadly weapon, or terroristic threats charges subject to immunity if they committed such a crime with the weapon they subsequently bring in.

There are two kinds of orders in New Jersey that allow for the mandatory surrender or seizure of weapons. The first is a Domestic Violence Restraining Order, which is typically issued to protect the victim from continuing acts of domestic violence. The second is an Extreme Risk Protective Order, focused on cases where the risk is to the accused or others in the general public. An ERPO is designed to protect the owner from harming themselves or other members of the community. The orders serve two different purposes, but both allow law enforcement to remove all weapons from the house or another location where the person possesses them. The weapons owner can have a hearing to dispute the seizure in order to prevent their weapons from being forfeited. By getting one or both of these orders dismissed, a defendant can have a subsequent hearing to achieve the return of any weapons taken.

Does Someone who Voluntarily Surrenders a Firearm or Other Weapon ever Facing Charges in NJ?

Unfortunately, yet. For instance, in one significantly publicized case, a volunteer fireman was arrested in Bergen County, New Jersey after he received two deliveries of silencers from China. He claimed he thought they were air filters. When he went to a nearby body shop to investigate further, the attendant said the items were indeed not filters, and he should take them to the police station right away. The man did just that, and a few days later, he received a second shipment. He said that he had paid through PayPal and was trying to reverse the transaction but could not. As he was driving into the parking lot of the police station, he was immediately arrested on weapons charges. Specifically, police charged him with four counts of possession of prohibited weapons and devices. Additionally, when the police searched his home, they found thousands of rounds of ammunition, ballistic vests, and several firearms, but all of them were safely stored and not unlawful. Clearly, these cases can and do occur, placing some defendants in a catch-22 situation when they don’t know the process they have to follow to avoid criminal liability and sever consequences.

Charged with a Crime Involving Voluntary Surrender of a Weapon in NJ? Contact our Attorneys for a Free Consultation

The Tormey Law Firm can guide you through the complex legal system, explain what can or can’t be done in the way of ownership, the types of weapons you can have and can’t possess, and all of the requirements and procedures for gun permits in New Jersey. Our lawyers have over 70 years of combined experience handling criminal and gun cases on behalf of clients in every county in the state. One of our attorneys has been cited in the Bergen Record as an authority on gun rights and laws, while another one of our lawyers is a former member of the gun forfeiture unit for the prosecutor’s office. In other words, we let the credentials speak for themselves when it comes to NJ weapons law. you need an aggressive attorney who would fight for your rights if you surrendered your weapons and followed procedure. No one should have their rights denied when they act according to the law.

If you are interested in surrendering a weapon to police, an experienced New Jersey gun lawyer on our team can provide you with all of the information you need to make a safe, legal surrender. If you have been charged with a crime involving a firearm or other device, contact us at (201)-614-2474 to speak with an aggressive attorney who will fight for your rights and help you navigate the challenges and pitfalls of the criminal process. No one should have their rights denied, and our firm is dedicated to serving these ends for our clients’ best interests. We provide free consultations 24/7 so feel free to get in touch with us anytime.