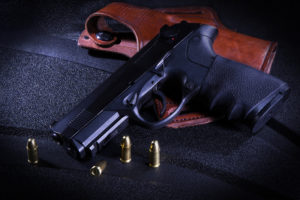 In 2016, the petitioner, Calvin Carlstrom submitted an application for a permit to carry a handgun.  The application was properly filed and stated that he needed the permit as part of his employment as a security guard.   It also included three endorsements to his good character and behavior, and certifications indicating the completion of several firearms training and safety courses.  The application further included a letter from his employer stating that Mr. Carlstrom was hired as an armed security guard and is required to carry a firearm in the performance of his duties as a guard at the AMC movie theaters.

The application was approved by the Roselle Police Department, however, it was denied by the Union County Superior Court.  The Superior Court held that an applicant seeking a carrier’s permit must demonstrate that he or she has “a justifiable need to carry a handgun.” The applicant in this case failed to show any specific threats or previous attacks that would justify a need to carry a firearm.  Additionally, the Superior Court made its decision without holding a hearing.

Mr. Carlstrom appealed the decision but the Appellate Division affirmed the Superior Court’s decision.  He then filed an appeal with the New Jersey Supreme Court.  The High Court declined to decide whether the lower court’s reasoning for denying the application was proper.  Rather, it clarified whether the applicant is entitled to hearing and if so, the extent and parameters of the hearing.

Is an applicant for a gun carry permit in New Jersey entitled to a hearing and how should that be conducted?

To start, the Supreme Court outlined the proper procedures when seeking to obtain a permit to carry handgun.  The Court indicated it is a two-step process, wherein, the application must first apply to the chief of the police in the municipality where the applicant resides and then, if approved, the application is forwarded to the Superior Court.

The application itself is subject to many requirements. It shall be signed by the applicant under oath and shall be endorsed by three reputable persons who have known the applicant for at least three years preceding the date of application” and who shall also certify thereon that the applicant is a person of good moral character and behavior. The application shall also be accompanied by a written certification of justifiable need to carry a handgun, which shall specify in detail the urgent necessity for self-protection.  Additionally, the certification should provide specific threats or previous attacks which demonstrate a special danger to the applicant’s life that cannot be avoided by means other than by issuance of a permit to carry a handgun. Moreover, the certification, when possible, should corroborate the existence of any specific threats or previous attacks.

Further, the applicant must also demonstrate to the police chief that he or she is thoroughly familiar with the safe handling and use of handguns.  And lastly, the application cannot be approved unless the applicant shows that he or she is not disqualified from purchasing a firearm.   A person is may be disqualified for a number reasons such as, they were convicted of a crime, they are subjected to a restraining, they are suffering from a physical or mental condition which would make it unsafe for them to handle a gun,  they have substance abuse problems, or pose a danger the public.

To resolve this issue, the Supreme Court received some assistance from the Administrative Office of the Courts (AOC).  Shortly after the Court decided to review the matter, the AOC issued a directive instructing the courts that if it had any questions regarding the applicant or his or her permit to carry application, it must hold a hearing to address those questions. Relying on the directive, the Supreme Court ruled that the County Superior Courts should schedule a hearing if it has any questions.  The Judge shall issue a notice scheduling the hearing and shall also submit a statement of reasons for its intent to deny the application.  The hearing must be held no later than 30-days after receipt of the application and the Judge shall make a determination within 14-days after the hearing.

Accordingly, based upon the Court’s reasoning, it appears that a hearing is preferred but not mandated.  Thus, it’s vital to prepare proper and thorough applications to secure a hearing just in case your application is denied.