Restraining Order was Dismissed, Can I Get my Guns Back? 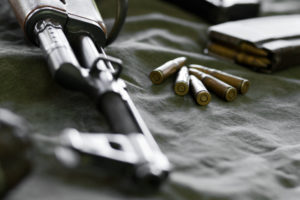 Many people in New Jersey ask the question: Can I get my guns back since the restraining order issued against me was dismissed? The answer to that question is, it depends.

Pursuant to the Prevention of Domestic Violence Act, law enforcement officers, when responding to a claim of domestic violence, have the authority to arrest the suspect if the responding officers find probable cause to believe that domestic violence has occurred. In addition, law enforcement officials have the authority to seize any weapons, firearms, firearm purchaser identification cards, and permits to purchase a handgun in the person’s possession.

Police Took my Gun for Domestic Violence Allegations in NJ

Upon seizing any property, police must deliver all weapons, firearms, firearm purchaser identification cards and permits to the county prosecutor. From there, the prosecutor must either return the property or, upon notice to the owner, petition a judge of the Family Part within 45 days objecting to the return of the property. In other words, the prosecutor must file a motion with the Family Division of the Superior Court requesting that your guns or weapons are not returned to you after the restraining order is dismissed.

Can the State Keep my Firearms if the TRO was Dismissed?

If a timely objection to the return of your weapons is filed, a hearing must be held within 45 days of the notice filed by the prosecutor to keep the seized items. Following the hearing, the Court is instructed to order the return of the weapons, firearms, and any authorization papers to the owner if the Court determines the following criteria is met:

The disabilities listed under Firearms Licensing Statute are as follows:

If your firearms are seized as a result of a restraining order and the restraining order is later dismissed, your property may be returned to you. However, it’s possible that the County Prosecutor may petition the Court objecting to the return of your guns if they believe you meet one of the other criteria mentioned above. If the latter occurs, the State bears the burden of demonstrating you are disqualified or unsafe to continue to own a firearm. You will have a hearing where this matter will be heard and you are entitled to have an attorney representing you during these proceedings.

To position yourself for the best outcome at a domestic violence weapons forfeiture hearing, you should have an experienced lawyer arguing your case. If you or someone you love has had their firearms seized because of a restraining order in New Jersey, please contact our office for immediate assistance at (201)-614-2474. Our experienced gun lawyers in NJ fight for those accused of domestic violence whose guns have been confiscated and we can help you. Call anytime for a free consultation about getting your weapons back after a restraining order in New Jersey.