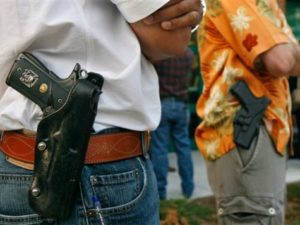 Following numerous acts of gun violence against law enforcement recently, Cleveland’s largest police union has called for a temporary ban on the open carry of guns at this week’s Republican National Convention in Ohio.

After police shootings in Baton Rouge, Louisiana and Dallas Texas, many officers are concerned for their safety and the safety of those peacefully attending the GOP convention. As a result, Steve Loomis, the head of the Cleveland Police Patrolmen’s Union, called for Ohio Governor John Kasich to temporarily ban the open carrying of guns during the Republican National Convention.

Emmalee Kalmbach, a spokeswoman for Governor Kasich, responded that the governor cannot legally suspend open carry at the convention. In a statement, she said, “Ohio governors do not have the power to arbitrarily suspend federal and state constitutional rights or state laws as suggested.”

Currently, Ohio allows for the concealed carry of firearms, and these laws do not regulate the open carry of firearms. In other words, if you are legally permitted to carry a concealed firearm, you are not barred from the open carry of the same weapon. Although authorities have established a secure perimeter surrounding the convention center within which “only authorized law enforcement personnel working in conjunction with the Secret Service may carry a firearm,” gun owners who are legally permitted to carry firearms can do so within the 1.7 miles surrounding this area, known as the convention’s “event zone.”

Clearly, with the national pulse such as it is, a saturation of weapons within a condensed zone of people has many citizens and law enforcement on edge. Others, however, have voiced their appreciation for the Governor’s refusal to infringe upon their Second Amendment rights, as well as those guaranteed to them under Ohio State law.

To combat fears of violence, 5,500 police officers from across the U.S. have been deployed to Ohio to maintain security among the 50,000 expected attendees of the convention, as well as the 10,000 protesters anticipated. Among those deployed are 26 New Jersey State Troopers. Governor Chris Christie is also scheduled to speak at the event.

If the GOP convention was held in New Jersey, the topic of open carry permits would raise similar issues, as New Jersey does not distinguish among concealed and open handgun carry permits. New Jersey does, however, strictly regulate the issuance of these permits, requiring applicants to meet the following criteria, as outlined in N.J.A.C. 13:54-2.3:

According to N.J.S.A. 2C:39-5, any person who is found in possession of a handgun without a valid New Jersey permit may be charged with unlawful possession of a weapon. When these offenses involve firearms, they are classified as second degree indictable crimes, punishable by a term of imprisonment ranging from 5 to 10 years. In addition, these crimes are subject to the sentencing guidelines outlined in New Jersey’s Graves Act, which requires a minimum term of imprisonment and a mandatory period of parole ineligibility.

For additional information pertaining to security and gun regulations at the Republican National Convention, access the following articles:

You can also learn more about gun laws in New Jersey and elsewhere in the United States by visiting the NRA Institute for Legislative Action website.