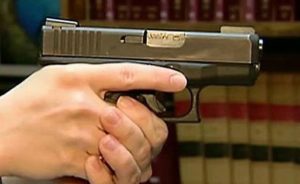 New York lawmakers have tightened the state’s gun laws by focusing on keeping weapons out of the hands of domestic violence offenders. “In a time when gun violence continues to relentlessly torment communities across the country while our federal government refuses to act, New York must lead the charge to end this epidemic once and for all,” New York Governor Andrew Cuomo said in a statement. “With this legislation, we can sever the undeniable connection between domestic abuse and deadly gun violence and continue to build upon the strongest gun laws in the nation.”

The state already had laws in place banning people convicted of a felony or “a limited number of misdemeanor ‘serious’ offenses, excluding many misdemeanor offenses that are undeniably serious” from possessing firearms, according to a news release from the governor’s office. However, the new bill, which was signed by Gov. Cuomo Tuesday, helps “to ensure no domestic abuser in New York retains the ability to possess a firearm once convicted of a disturbing crime.”

Prior to the new law in New York, the nonprofit Giffords Law Center to Prevent Gun Violence reported there were 27 states with laws that allow weapons to be taken from abusers but only after they have become the subject of a protective order. The new law in New York is not the first to take action in regard to domestic violence offenders in the wake of the Parkland school shooting in Florida in February. In early March, Oregon passed a law banning people convicted of stalking or domestic violence, or under a restraining order, from buying or owning guns or ammunition.

New Jersey has statute which permits the seizure and forfeiture of firearms from domestic violence offenders. Under N.J.S.A. 2C:25-21, when a person claims to be a victim of domestic violence, and where a law enforcement officer responding to the incident finds probable cause to believe that domestic violence has occurred, the law enforcement officer shall arrest the person who is alleged to be the person who subjected the victim to domestic violence. In addition, the authorities shall seize any firearm or weapon, as well as any firearm purchaser identification card or permit to purchase a handgun. Following the seizure, the officers shall deliver all weapons, cards, and permits to the county prosecutor and shall append an inventory of all seized items. From there, all property seized shall be returned to the owner unless the local prosecutor who has possession of the seized items files a motion to the Superior Court within 45 days seeking to obtain title and/or to revoke any and all permits or licenses. If the owner wishes to have his property returned, he may request a hearing to challenge the seizure.

At the hearing the court shall order the return of the firearms, weapons, and any authorization papers relating to the seized weapons to the owner if the court determines the owner is not subject to any of the disabilities set forth in N.J.S.A. 2C:58-3c. The court must also find that the domestic violence complaint has been dismissed at the request of the complainant or when the prosecutor determines that there is insufficient probable cause to indict; or if the defendant is found not guilty of the charges; or if the court determines that the domestic violence situation no longer exists.