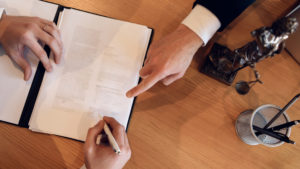 In March of 2021, the New Jersey Attorney General entered into a settlement agreement with a California based company named U.S. Patriot Armory. The company is a firearm dealer and was accused of unlawfully selling and advertising to New Jersey residents about their ghost guns kits. The settlement resulted in a monetary penalty and permanent injunction against the company. Before we discuss the details of the lawsuit, it’s important to understand what a ghost gun is and the surrounding criminal laws.

What is a Ghost Gun?

A ghost gun is a term used to describe an untraceable or undetectable firearm. Typically, the gun is manufactured without a serial number or any other form of identifying feature, which makes it very difficult for law enforcement to trace. Also, some ghost guns are made from non-metal material and consequently, can be passed through metal detectors and enter airports and other secure buildings. Lastly, most ghost guns are assembled in the privacy of an individual’s home. It is common for consumers to purchase the parts online and have them shipped to their address. The major concern with selling and shipping gun parts is that anyone can buy them. Meaning, individuals who have alarming criminal backgrounds and very serious mental health issues can purchase manufacturing kits online and then, build a weapon cable of killing people.

In many parts of the country, ghost guns are perfectly legal. Supporters argue it is their Second Amendment Right to bear arms and in that same vein, they have the right to own firearms, free from registration and tracking regulations. Nevertheless, a few States, including the Federal Government, believe that they are limits to the Constitution. To begin, under the Federal Gun Control Act, it is unlawful for convicted felons, domestic violence perpetrators, and persons suffering from mental health issues to own a firearm. Additionally, individuals and companies who are engaged in the business of manufacturing or dealing in firearms must identify their guns with serial numbers and keep records of their transactions. However, the federal law does not address the selling and shipping of parts, which is how companies are able to legally sell the kits and furthermore, how prohibited individuals are able to at least purchase the components and later assemble a fully functioning gun.

Some States have closed this loophole by passing legislation specifically aimed at ghost guns and ghost gun kits. In 2016, California enacted a law that requires any person who plans on building a homemade firearm to obtain a serial number from the State and pass a background check. In 2019, Connecticut criminalized possession of plastic and undetectable guns. Similarly, in Pennsylvania, it is unlawful to possess a firearm that is designed to be covert or untraceable.

Which brings us to New Jersey. In 2018, our Congress passed several bills, which were signed into law by our Governor, seeking to ban ghost guns and ghost gun kits. The specific laws can be found in the state’s Criminal Code under N.J.S.A. 2C:39-9. In short, the statutes provide that it is unlawful to purchase firearm parts to manufacture a firearm without a serial number. It is also illegal to manufacture or attempt to manufacture a covert or untraceable firearm. In that same vein, it is equally unlawful to transport a manufactured firearm without a serial number. And lastly, individuals are prohibited from manufacturing or building a gun using a three-dimensional printer. Each offense is classified as a crime of the third degree and if convicted, the defendant will be facing a prison term between three to five years and a fine up to $15,000.

Despite New Jersey’s harsh gun-control laws, many companies were simply ignoring our laws and others were outright defying it. As a result, the NJ Attorney General took action and filed a consumer fraud lawsuit against one specify establishment. In his complaint, the state’s chief law enforcement officer asserts that the defendant, James Tromeblee, Jr., owns and operates a company called U.S. Patriot Armory. The complaint goes on to claim that the company engaged in fraudulent and deceptive business practices by knowingly advertising and selling ghost kits to the residents of New Jersey. As such, the State of New Jersey was seeking a court order prohibiting the company from advertising and selling their product in our State.

Before the lawsuit was filed, our Attorney General sent several cease-and-desist letters warning U.S. Patriot and other similar companies to stop advertising and selling ghost gun kits to New Jersey residents. The letters further informed the businesses that if their conduct continues, a civil lawsuit would be filed. Nevertheless, U.S. Patriot, alongside other companies, continued to promote and sell their products. Then, an undercover investigator with the Division of Consumer Affairs accessed the company’s website and purchased a gun kit that allowed him to manufacture an AR-15 Assault Rifle. This is a very dangerous and deadly weapon and if a violent criminal or someone with severe mental health problems was handling this type of firearm, it is easy to foresee a mass shooting occurring. It was noted that the website did not list any disclaimers about New Jersey law. Specifically, the website did not warn the consumers that ghost guns and ghost gun kits are illegal in the State and if they purchase such a product, they may be subject to criminal prosecution. In fact, the website stated the opposite. The investigator observed advertisements specifically saying it was legal in reference to ghost gun kits.

In light of the company’s failure to cease and desist, coupled with their misleading advertising, a civil lawsuit was filed in March of 2019. Two years later, a Final Consent Judgement was executed by the Court. The Consent Judgement provides two major provisions. First, it requires the defendant to pay damages in the amount of $70,000. Second, it prohibits the company from shipping any unserialized firearm kits to any New Jersey addresses. Moreover, the company’s website must provide a clear and conspicuous message which states, “We Do Not Ship to New Jersey.”

In addition to the U.S Patriot suit, the State’s top prosecutor also achieved two other favorable settlements in similar cases. In September of 2020, a Nevada based gun-dealer paid the State $50,000 for illegally selling high-capacity magazines to residents of New Jersey. Please note, prior to 2018, a high capacity magazine was defined as a magazine which held more than 15-rounds. It was later reduced to 10 rounds. Also, in January of 2021, a Florida company agreed to pay $135,000 in penalties and further agreed to stop selling high-capacity magazines anywhere in the country.

Questions about a Ghost Gun Charge in NJ?

If you have questions or concerns about New Jersey laws regarding ghost guns or other firearms, please feel free to contact The Tormey Law Firm to speak with an attorney free of charge. We can be reached anytime (201) 614-2474 if you have been charged with a crime for unlawfully possessing a ghost gun, selling, manufacturing, or any other type of criminal activity involving weapons.