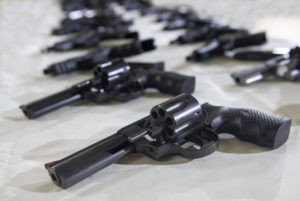 The new bill addressed specific concerns that some opponents of the bill had when it was first passed in the NJ Legislature. Governor Christie reportedly vetoed the earlier version of the bill because it did not require the officers to undergo “specialized training covering security issues that routinely arise in the school setting.” At the time, Governor Christie explained that “it is vital to ensure that the officer is integrated into the unique setting of a school community and is properly trained to function not only as a safety expert and law officer, but also as a liaison to community resources, educators, and counselors.”

The bill permits the retired officers to carry firearms. However, the law includes a very clear limitation by stating that “a special law enforcement officer shall not carry a firearm except while engaged in the actual performance of the officer’s official duties and when specifically authorized by the chief of police, or, in the absence of the chief, other chief law enforcement officer of the local unit to carry a firearm and provided that the officer has satisfactorily completed the basic firearms course required by the commission for regular police officers and annual requalification examinations as required for permanent, regularly appointed full time officers in the local unit.”

The bill further establishes that “any firearm utilized by a special law enforcement officer shall be returned at the end of the officer’s workday to the officer in charge of the station house, unless the firearm is owned by the special law enforcement officer and was acquired in compliance with a condition of employment established by the local unit.”

Click here to read a full text of the bill.

In New Jersey, it is illegal to carry a handgun unless the person carrying the firearm has a permit to do so. N.J.A.C. 13:54-2.2 and 2.3 states: “No person, except as provided in N.J.S.A. 2C:39-6, shall carry, hold or possess a handgun without first having obtained a permit to carry the same in accordance with the provisions of this chapter.” N.J.A.C. 13:54-2.3 outlines the criteria that an applicant must fulfill in order to be issued a carry permit. The three primary requirements that an applicant for a handgun carry permit must satisfy are: