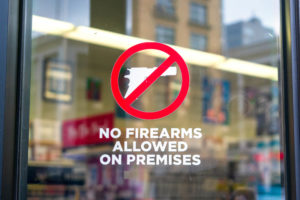 New Jersey is seeing yet another legal challenge to its restrictive laws on firearms, as several gun rights advocacy organizations have filed a lawsuit centered on the constitutionality, or lack thereof, of the state’s rules on carrying guns. The suit names the NJ Attorney General, the Superintendent of the NJ State Police, and multiple individual members of local police departments where several of the plaintiffs received gun permit denials. The plaintiffs suing state officials include the Firearms Policy Coalition, the New Jersey 2nd Amendment Society, and the Second Amendment Foundation. Their filing specifically cites New Jersey’s laws about who, where, when, and how people are allowed to carry handguns in this state as fundamentally opposed to Second Amendment rights guaranteed under the United States Constitution.

In New Jersey, the locations for carrying a handgun without a permit to do same are limited to a person’s residence or their business. Aside from these specified locales, you can travel to a shooting range if you keep the weapon in a secured container and unloaded. Any ammunition must be kept separately during the trip to and from your home.

The lawsuit also focuses on the stringent requirements for obtaining a permit to carry. These rules essentially bar the vast majority of the population from having a loaded, operable firearm anywhere other than their home. The gun permit process has come under fire numerous times before, to no avail. And the procedure depends on what you are trying to accomplish, meaning purchasing or carrying a firearm. When seeking a permit to keep the gun on your person, the regulations are even more strict than those for mere purchasing permits.

Specifically, a person must successfully demonstrate their good moral character and lack of any prohibitive factors for gun ownership; that they have full knowledge and capabilities when it comes to gun handling and use; and that they have a justifiable need to carry a gun in the first place. The justifiable need criteria is extensive and is often where applicants find themselves in a predicament. In essence, your application to the state or local police department must provide evidence to establish that you are in an emergent situation with the need to protect yourself and that you have no other option than to arm yourself. In the absence of clear examples of threats or harm against you, meeting this requirement can prove virtually impossible.

Moreover, not only do you need to fulfill all of these elements in order to obtain your carry permit, but you need to do it twice, first at the police level and then again at the Superior Court level. You do have the right to appeal within a limited, 30 day timeframe so taking action immediately with the help of a well-versed attorney is best advised if you hope to win your case.

It is on all of this where the latest lawsuit in New Jersey hinges. The groups suing argue that the difficulty to obtain a carry permit, and the limited circumstances under which people can legally have handguns in their possession outside of their home, are in clear violation of the citizen’s right to bear arms. How the court finds in this case is unknown as of yet.

What to Know Right Now

Unless and until New Jersey revises its restrictive firearms laws, you are at risk of being charged with a second degree felony offense for unlawful possession of a weapon for carrying a firearm without the necessary permit. In fact, for unlawfully carrying a handgun, you face prison for up to 10 years. It is equally important to be aware that any permits from other states do not stand up in New Jersey, exposing many otherwise law abiding, gun owning citizens to unanticipated arrests and criminal penalties.

If you have questions, concerns, or a firearms-related legal matter in New Jersey, the highly knowledgeable lawyers at our firm are prepared to assist you. We represent defendants in NJ gun cases, appellants facing gun permit rejections, and applicants seeking weapons permits for buying or carrying. To speak with an attorney regarding your particular needs, call (201)-614-2474 or send us a message online for further information. Consultations are free and available 24/7.

For additional information about the lawsuit, see this article.