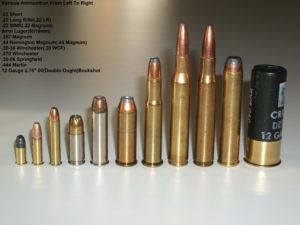 A New Jersey Assemblyman recently announced the reintroduction of legislation that would reduce the amount of ammunition a firearm could hold. Democratic Assemblyman Lou Greenwald reintroduced a proposed law that would limit the amount of ammunition a magazine could hold from 15 rounds to 10. The legislation would also designate a semi-automatic rifle with a fixed magazine capacity exceeding 10 rounds as a prohibited assault firearm. In support of the law, the assemblyman stated that “our nation is in the midst of a gun violence epidemic… now, as we enter a new term with a new governor, we have a real chance to pursue legislation to reduce the number of deaths by gun violence and protect our neighborhoods.” The proposed law was brought to the legislature last year, but NJ Governor Chris Christie vetoed the bill.

Current New Jersey gun laws, set forth in N.J.S.A. 2C:39-1(y), defines “large capacity magazine” as “a box, drum, tube or other container which is capable of holding more than 15 rounds of ammunition to be fed continuously and directly therefrom into a semi-automatic firearm.” And pursuant to N.J.S.A. 2C:39-3(j), any person who knowingly has in his possession a large capacity ammunition magazine is guilty of a crime of the fourth degree unless the person has registered an assault firearm pursuant to Section 11 of P.L.1990, c.32 (C.2C:58-12) and the magazine is maintained and used in connection with participation in competitive shooting matches sanctioned by the Director of Civilian Marksmanship of the United States Department of the Army. Likewise, N.J.S.A. 2C:39-9(h) states that any person who manufactures, causes to be manufactured, transports, ships, sells, or disposes of a large capacity ammunition magazine which is intended to be used for any purpose other than for authorized military or law enforcement purposes by duly authorized military or law enforcement personnel is guilty of a crime of the fourth degree.

The penalties for a fourth degree crime such as the possession of a large capacity magazine in New Jersey include up to 18 months in New Jersey State Prison and up to a $10,000 fine. Thus, if you are accused of a crime related to the possession or disposition of a large capacity magazine in New Jersey, you are facing some pretty stiff consequences. That’s where the experienced weapons defense lawyers at the Tormey Law Firm can help. Our seasoned firearms defense attorneys have successfully defended clients accused of gun crimes across New Jersey and we are available around the clock to help fight for you. Contact us today for a free consultation if you have been charged with a gun crime in New Jersey.