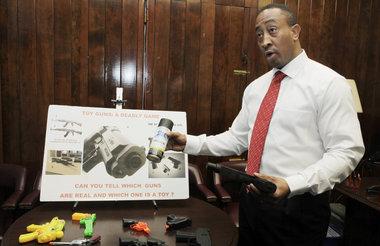 East Orange recently banned the sale of realistic-looking toy guns and now East Orange Councilman Ted Green has been calling for neighboring towns to do the same.

In fact, Orange and Irvington have already joined in banning the sale of toys that could be mistaken for real firearms. Councilman Green noted that local officials “don’t want imitation guns that look like real guns” being used on the streets of Essex County cities. Green elaborated that East Orange banned the sale of imitation guns shortly after the much-publicized death of Tamir Rice, a 12-year-old boy who had an Airsoft gun when he was shot and killed by a Cleveland, Ohio police officer in 2014.

East Orange Police Director Sheilah Coley also supports the recent ban in East Orange, New Jersey. Coley acknowledged that “it’s only natural for children to role play,” but said that East Orange officials investigated and found “that older children, and in some cases, adults were brandishing these toys as real weapons.” By banning the sale of these types of toy guns, noted Coley, East Orange “has helped to eliminate the threat of people using the guns to commit crimes.”

Currently, there is also pending New Jersey legislation that would ban the sale of toy guns and imitation firearms statewide. The legislation was approved by the law and public safety committee in September 2016 and is now pending in the appropriations committee.

To learn more about criminal charges for imitation firearms or possession of a weapon for an unlawful purpose, contact the weapons defense lawyers at the Tormey Law Firm today.