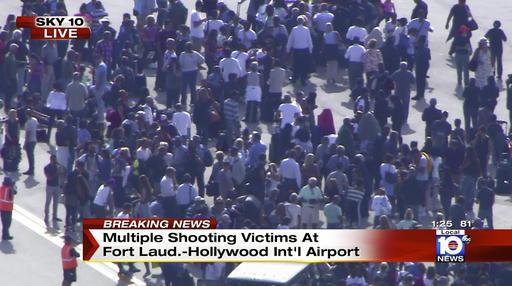 The gunman who opened fire in the baggage claim area at the Fort Lauderdale airport, killing five people and wounding eight, had apparently transported the gun he used in his checked baggage.

Chip LaMarca, a Broward County Commissioner, told the Associated Press that the shooter arrived in Fort Lauderdale with a gun in a checked bag and that “after he claimed his bag, he went into the bathroom and loaded the gun and started shooting.” LaMarca added that law enforcement officials don’t yet know why the suspect went on the shooting rampage.

Additionally, TSA regulations allow ammunition to be transported in checked baggage, but firearm magazines and ammunition clips, whether loaded or empty, must be securely boxed or included within a hard-sided case containing an unloaded firearm, while small arms ammunition, including ammunition not exceeding .75 caliber and shotgun shells of any gauge, may be carried in the same hard-sided case as the firearm.

However, even though the TSA permits guns to be transported in checked baggage, state laws also apply to a person transporting a gun through an airport. For example, a traveler going through Newark International Airport in Newark NJ is subject to New Jersey’s strict firearms laws that control how to legally transport firearms in the State of New Jersey. Thus, even though the TSA may permit the gun to be transported into New Jersey, once the traveler arrives, New Jersey gun laws regarding possession of weapons and carrying firearms will apply.

If you are travelling to NJ and plan to legally bring a gun, the firearm attorneys at the Tormey Law Firm are available to explain New Jersey’s strict gun laws regarding the possession of firearms, carrying handguns, and the penalties associated a weapons crime conviction.