Can a felon live in a home with a gun if it belongs to someone else in NJ? 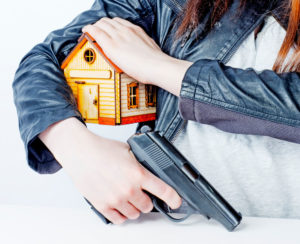 Unfortunately, in the State of New Jersey, if one member of the household is prohibited from owning a firearm or disqualified from obtaining a permit, the entire home is affected. That may sound unconstitutional or even unconscionable to some, but presently, that is the law of the land in the Garden State. Typically, the conditions that would lead to a gun permit application being rejected would only apply to the individual applicant. Meaning, if a person applied for a permit, the police would conduct an investigation into that particular person’s background and if he or she had a prior conviction or some other disqualifying condition, they would be denied. However, over the years, the scope of the investigation has expanded and it’s possible that other household members may interfere with a person’s application. So how did the legal landscape settle on such an unforgiving terrain? Let’s take a more in depth look at how this happened.

Going back several decades, in a case called The Application of Clark, located at 607 A.2d 1385 and 257 N.J.Super. 152 (N.J.Super.L.,1992), a person named Kathleen Clark submitted a permit application in hopes of purchasing two handguns. The police conducted an investigation but denied the permit on the basis that it would not be in the interest of the public safety and welfare to issue her a permit. She appealed the denial and a hearing was held before the Superior Court. At the hearing, it was revealed that her husband was previously convicted for burglary and moreover, in light of his conviction, he was prohibited from owning or handling a firearm. Consequently, the trial judge denied Ms. Clark’s application. She then appealed the decision to the Appellate Court but unfortunately, the Justices of the Appellate Division affirmed the lower court’s decision. The Court ruled that the State of New Jersey has broad power and authority to act in the best interests of the public. To that end, according to the Court, it is in the public’s interest to prevent convicted persons from having access to firearms. Therefore, the petitioner’s personal interest must yield to the overall interest of the community and her application for a permit shall be denied.

Likewise, in In the Application of J.H,, which is an unreported case from 2015, the Court reached a similar conclusion. In that case, J.H. applied for a firearm identification card and several permits to purchase a handgun. The police reviewed the application but issued a denial citing a public interest concern. J.H. submitted an appeal and at the hearing, it was determined that J.H’s wife was disqualified from possessing a firearm. The police previously found and the Court agreed that the applicant’s spouse had two prior felony convictions for drug related offenses. On top of that, it was also revealed during the hearing that his spouse also had a DWI and had some underlying substance abuse problems. Consequently, the trial judge found that placing a weapon into this home where J.H.’s wife resided was against the public health, safety, and welfare. J.H. appealed the decision but in accordance with the Clark ruling, the Appellate Division upheld the denial.

The Appellate Court wrote that all individuals have a Second Amendment right to bear arms, however, the State is free to set in place reasonable limitations. In New Jersey, one limitation is the ability to acquire a permit if the issuance of the permit would be contrary to the public safety and welfare. The Justices then discussed the Clark case and wrote, in that case, the application for a permit was denied because the applicant’s spouse had a burglary conviction. For the J.H. matter, the facts before the Court suggest an even higher risk because the applicant’s spouse has multiple convictions and a related substance abuse problem. Therefore, the applicant for a permit shall be denied.

Accordingly, as you can read, the Clark and J.H. cases tell us if a cohabitating spouse has a prior conviction, you may be denied a firearm permit in New Jersey.

Additionally, it is also worth noting the following case. In In re Z.L., found under 440 N.J. Super 351, 359 (App. Div. 2015), the Appellate Court upheld a firearm permit denial due a series of domestic violence related arrests. In this case, the applicant was arrested in 1998 and between the years of 2003 and 2011, the police were called to his home on five different occasions. However, what is important to note in this case is the fact that the applicant was never convicted of any criminal offense and no restraining orders were ever filed against him. Nevertheless, the Court denied his application due to the number of complaints. The Court ruled that the incidents were not isolated and aberrational, and moreover, each complaint was imbued with the potential for violence and the presence of a firearm in such a household enhances the potential for a lethal reaction. Therefore, it would not be in the interest of the public health, safety, or welfare to grant the applicant a firearm related permit.

With all that in mind, New Jersey case law provides the following guidance for potential gun owners. First, under the Clark and J.H. decisions, if a spouse has a criminal conviction, it is very likely that your application for a firearm related permit will be denied. Second, applying the reasoning of the Clark and J.H. courts broadly, any member of the house that may pose a threat to the public, can interfere with a person’s request for a permit. For example, if a member of your household has an underlying mental health issue, your request for a permit may be denied. Similarly, if a spouse or child is suffering with alcohol or drug use problems, your application may be rejected. And lastly, in accordance with the Z.L. case, a person does not need a conviction or be subject to a restraining order to have their application denied. The existence of several arrests or calls to the police may amount to a public safety concern. Also, let’s not forget the statute itself. If any person residing in the home is disqualified for one of the conditions listed in statute, the petitioner’s application will likely be rejected.

If your application is denied due to another person’s background, there are a few options you can explore. To start, you may file a gun permit appeal. Pursuant to the Gun-Control statute, codified under N.J.S.A. 2C:58-3, any person who disagrees with the decision to deny a permit has the right to file an appeal. Following the submission of the appeal, the Court will schedule the matter for a hearing. At that juncture, the following defenses or approaches can be utilized. First, do not automatically assume the police conducted a proper background search. The police make mistakes just like everyone and sometimes, the background they uncover is for the wrong individual or contains inaccurate information.

In that same vein, especially in the context of a spouse or other household member, the police may have denied your application because of another person’s history but you are no longer associated with that individual. You may be divorced or your child moved out of the home and consequently, the unfit individual does not have access to your guns. Therefore, the Court should grant your appeal. Second, assuming everything is accurate and the unfit person is still a resident of your home, you may be able to negotiate a settlement with the State. In some counties and courts, the applicant can agree to place the firearms outside the home and in exchange, the State will agree to issue a permit.

If you or someone you know is seeking to apply for a firearms permit but he or she has had some contact with the criminal justice system, it is best to contact an experienced attorney. Our firm offers free consultations and we love to hear from you. Simply call (201) 614-2474 now.