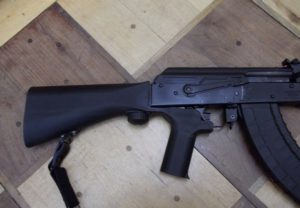 New Jersey completed its objective for banning “bump stocks” – the gun accessory allegedly used by the gunman in the Las Vegas mass shooting. The New Jersey State Assembly Law and Public Safety Committee voted 8-0, with one abstention, to advance a law that would prohibit the sale and possession of bump stocks in NJ. Bump stocks are firearm accessories that can be attached to semiautomatic rifles to allow them to fire bullets more rapidly, like an automatic weapon. The legislation contained in Bill S3477 deems the possession of a bump stock to be a third degree crime, punishable by 3-5 years in New Jersey State Prison and a fine of up to $15,000. Although NJ Governor Chris Christie has often opposed new gun laws in New Jersey, he indicated that he would be open to regulations on bump stocks. Christie said that “it’s an accessory…not a gun. It’s not an infringement on anybody’s Second Amendment rights.” The former Governor made good on his word, ultimately signing the bill into law prior to leaving office.

Under N.J.S.A. 2C:39-1 of New Jersey’s criminal code, a bump stock is defined as any device or instrument for a firearm that increases the rate of fire achievable with the firearm by using energy from the recoil of the firearm to generate a reciprocating action that facilitates repeated activation of the trigger.

As for trigger cranks, the law defines these as any device or instrument to be attached to a firearm that repeatedly activates the trigger of the firearm through the use of a lever or other part that is turned in a circular motion; provided, however, the term shall not include any weapon initially designed and manufactured to fire through the use of a crank or lever.

In simpler terms, both devices allow the gun to fire more bullets at a faster pace. A bump stock replaces a rifle’s standard stock, which is the part held against the shoulder. The “new” stock bumps the gun back and forth and allows the rifle to fire rapidly. A trigger crank is a crank or mechanical arm that attaches to the gun and can pull the trigger faster than a person. Thus, more bullets are fired.

In reaction to the deadly Las Vegas shooting, New Jersey lawmakers sought to reduce the firearm power of weapons. In turn, they enacted several laws targeting bump stocks and trigger cranks. To start, legislators made it unlawful to possess such devices. Under N.J.S.A. 2C:39-3, any person who knowingly possesses a bump stock or a trigger crank is guilty of a crime of the third degree. A third degree felony conviction exposes an individual to three to five years in jail and a fine up to $15,000.

Additionally, under N.J.S.A. 2C:39-1, an ordinary firearm will be considered an Assault Firearm if there is a bump stock attached to it. Since the bump stock is attached to a firearm, the gun is considered an Assault Weapon. With that in mind, under N.J.S.A. 2C:39-5, any person who knowingly has in his or her possession an assault firearm, is guilty of a crime of the second degree. For a 2nd degree indictable offense, the person may be sentenced to five to ten years in jail and may also be subject to a fine of $150,000.

Not only did New Jersey’s bump stock ban legislation effectively become law, but the fact of the matter is that New Jersey’s gun laws already criminalize the possession of the weapons that could potentially be modified by a bump stock. In fact, the penalties for possessing a machine gun or assault firearm of any kind in NJ include a prison sentence of 5-10 years, with applicable mandatory minimum sentences and fines of up to $150,000.

How the Graves Act Applies to Bump Stock Weapons Cases

A second degree assault weapon charge also triggers the Graves Act, which is a very serious sentencing statute. The Graves Act is codified under N.J.S.A. 2C:43-6, and requires the court to impose prison for those convicted of eligible crimes governed by the statute. Furthermore, the person found guilty has to serve one-half or 42 months of the given sentence, whichever is the longer term. In short, if you are convicted of a Graves Act offense, the Court must sentence you to prison and the minimum term is 42-months. It doesn’t matter if nobody was harmed or injured and it won’t matter if you do not have a criminal history. The Act requires the Judge to sentence the individual to prison for the mandated minimum period of time.

Are there Defenses to Beat NJ Bump Stock Charges?

If you are facing an assault rifle charge involving a bump stock, there may be some legal defenses you can explore. The first defense is inoperability. As mentioned above, it is unlawful to knowingly possess an assault firearm and moreover, a traditional firearm will be considered an assault rifle if a bump stock is attached. Nevertheless, in accordance with N.J.S.A. 2C:39-5f, a citizen can legally possess an assault firearm if it is deemed inoperable. To that end, a firearm is considered inoperable if it is altered in such a manner that it cannot be immediately fired.

Another potential defense is challenging the procedure the police utilized to find and ultimately take the firearm so it can be used as evidence. Under the United States and New Jersey Constitution, any state actor must have a warrant or probable cause to stop and search a person and their home. If it can be shown that the police failed to obtain a warrant and did not have sufficient cause to stop or search an individual, the charges will likely be dismissed.

Another legal option is seeking a Graves Act Waiver. A Waiver is not a legal defense because it does not defend against the underlying charges. Also, it does not challenge or question if the police followed proper constitutional procedure. Rather, it is a request to waive the serious and harsh sentencing mandates of the Graves Act. If a Waiver is granted, a defendant may be sentenced to probation, as opposed to spending three and half years in prison.

Thus, if you are facing criminal charges involving bump stocks, trigger cranks, or the unlawful possession of automatic weapons or assault weapons in New Jersey, the stakes are very high. You should not hesitate to consult with an experienced weapons defense lawyer at the Tormey Law Firm. Our seasoned New Jersey firearms defense attorneys are fully familiar with NJ gun laws and we are available 24/7 to discuss your case. Contact us anytime.